Del Thomas has been playing guitar since he was a young kid, having watched the Beatles, Stones and Kinks on TV. In the early 70’s he was bitten by the singer songwriter bug and his record collection was filled with Cat Stevens, Sutherland Brothers and Richard Thompson albums. Then he heard Fleetwood Mac’s greatest hits and Eric Clapton’s 461 Ocean Boulevard album and he discovered the blues. From there, his interest in a wide range of styles expanded, ranging from The Eagles, Poco and Lynyrd Skynyrd to Bonnie Raitt and Ry Cooder but the roots of his interest remained in the blues and folk and alt-country (before it was even called that).

As with most guitarists, he cut his teeth on the instrument by playing along to his records but his interest was always in players who had a more melodic playing style and who played for the song rather than going off on flash solos with no soul.

Having played with a few covers bands in Scotland, when he moved to NZ in 1995, one of the first things he did after arriving in Wellington was to start a band which would allow him to develop his playing and song writing skills. Glass Onion was the name of the band and, for a band playing original pop/rock, they were reasonably successful, releasing a 4 track EP in 1997 (which got a fair amount of play on several Wellington radio stations as well as supporting acts such as Collective Soul, The Exponents, Midge Marsden and The Muttonbirds.

After Glass Onion folded, Del spent some time working on more originals which sadly, never saw the light of day – but may do someday as they remain good songs.

In 2002, he put together a blues based covers band with John Barrett, a recent arrival from Adelaide. The Pukekos – with various lineups over the years - played extensively around Wellington and were a pretty good band, even getting a slot on TVNZ’s ‘Good Morning’ programme in 2005.

Then followed a 3 year stint with another covers band, SilverLine, and then Del put together Manalishi, a band paying tribute to the blues of early Fleetwood Mac and Peter Green. This band continues to gig occasionally around the blues clubs and summer festivals and always goes down well with any crowd. Once again, Del was playing the music that first inspired him to pick up a guitar.

However, the original material that Del was writing was starting to back up and needed somewhere to go. Having sent a couple of demos of these songs to Roger Marbeck at Ode Records, he received enough positive feedback from Roger to back up the audience applause whenever he played the songs at gigs to convince him to do some serious recording and get the songs out to the world.

So, in February 2013, Del, along with drummer, Mo Phillips, bassist, George Barris and keyboard player, Bob Smith, went into Del’s home studio and laid down the basic live tracks for the songs featured on ‘Driving Home Alone’. Del added a few extra guitar parts and backing vocals before polishing up the mixes.

The end result of their efforts can be heard on ‘Driving Home Alone’.

Recorded at Summerfield Studio in early 2015, Del's second solo album was slightly rockier than the first but also featured several acoustic-based songs than 'Driving Home Alone'. However, the songs remained as before - focussed on relationships - good and bad.  Go to the Music Tracks page to listen to some sample tracks.

Most recently, Del and his new band released the album 'Changes Coming' - in 2017 - and they were  delighted to be invited to open for the wonderful Californian blues guitarist, Chris Cain, when he appeared in Wellington that year. Chris Cain, who has been touted by no less than Joe Bonamassa as being a blues player with real soul and tone was so impressed with Del's band that he suggested that he'd like to record one of Del's songs - Where The Sun Don't Shine. So, who knows, Del's music might find a new audience with the growing international band of Chris Cain fans!!

Go to the Music Tracks page to listen to some sample tracks. 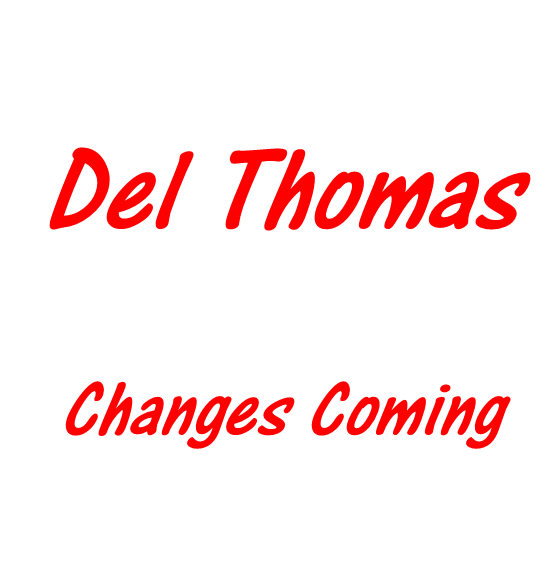 Del has had an interest in photography since he got a very basic Praktika SLR camera from his parents for his 21st birthday. He spent many years learning his craft back in Scotland including taking night school classes in black and white photo developing. However, for a variety of reasons, he put his camera down for many years and only really got back into it in 2019 when he bought his first digital camera. He quickly found his mojo and love of the craft again and rapidly built a substantial portfolio of images. For more information on this side of Del's creative skills click on the 'Photos' tab in the main site menu.